HelpSign In
Turn on suggestions
Auto-suggest helps you quickly narrow down your search results by suggesting possible matches as you type.
Showing results for
Search instead for
Did you mean:
Options

A few years ago, I relocated from New England to Florida’s space coast so I could better service my clients in the aerospace industry.  No matter how many rocket launches I cover at Cape Canaveral, it never gets old.  Due to the weather, time of day, time of year, type of rocket, the particular launch pad used, and other factors, no two launches are ever the same.  That means some launches are more photogenic than others, but they are always fun and challenging to shoot.

Sometimes I will have as many as eight cameras shooting 4K (usually in slow-motion), and other times less than half that number.  It depends on many factors, including the needs of the client.  Having multiple cameras allows me to get wide, medium, and tight coverage.  The cameras I use most for launches are my FX6, Z750, Z280, F55/R7, FS7/R5, a1, a6300, and S1H.  Eight cameras can get a little hectic to manage, especially if the launch is at dusk or dawn with constantly changing light.

I shot this launch of a SpaceX Falcon Heavy last Sunday as it put a couple of satellites for the US Space Force in orbit.  Sunday’s launch was a Falcon Heavy rocket which is basically three regular Falcon 9 rockets strapped together in order to get a super heavy payload into orbit.  For most SpaceX launches, the booster will land on a special barge hundreds of miles at sea, but occasionally the payload will be light enough that the booster(s) can come all the way back to the Cape.  For this launch, the center booster was allowed to splash down into the ocean, and eight minutes after launch, the rocket's two side boosters successfully landed at Cape Canaveral's Landing Zones 1 and 2.  Seeing the rockets return to the Cape is just as cool as the launch itself.  Amazing technology at work.

On this launch, I started out operating the FX6 until the rocket had reached about 15 miles in altitude and then I jumped over to the Z750 (24x7.8 Fujinon lens + 2x extender) to track the rocket as it got higher and farther away.

Resetting all four cameras for the landing caused me to miss part of boosters returning in the dark sky, but that is a risk I take with managing multiple cameras.   Sometimes I nail it, and sometimes I don’t.  This one was kind of in the middle, as far as success is concerned. 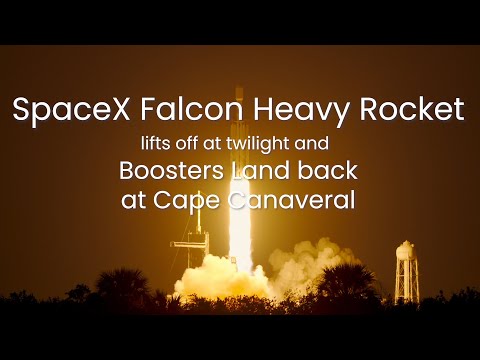 SpaceX stakeout, looks like fun! Do you find you want to have timecode sync in a shooting situation like this? Or does that not apply here?

Good question about timecode sync.  No, it isn't necessary and wouldn't provide any benefit in post.  And because the cameras are shooting a mix of 24p and 30p at 60 to 120 fps, the numbers would never sync up.  In fact, in the video above, some of the shots are not even in true chronological order.

Also, another thing to realize that some of the clips are 5x longer than real time.  I start the cameras rolling one minute before launch, and most of the action is over 4 minutes after launch (unless there is a booster landing).  In that amount of time, a camera like the FX6 rolling at 120 fps has created a 25 minute long clip!

That's where Catalyst Browse really helps reduce the amount of footage that must be offloaded and backed up.

I always enjoy your launch footage. Four cameras at once shooting live action and no external monitors? I'm sure you have a reason for this but I have no idea what it is?

Hi Steven, I'm glad to hear you like my launch videos.  They are certainly fun to shoot.

All my cameras have excellent electronic viewfinders, so external monitors are not needed . . . or wanted.  I've never used monitors on any camera I've ever shot with and never will! 🙂    There is no substitute for a good EVF.

We provide the cinematography community with information, inspiration, and news.

SonyCine is here for the filmmakers and cinematographers who like to stay in the know, keep innovating, and connect with the world in meaningful ways. You bring your curiosity and ideas, and we'll provide the knowledge, inspiration, and state-of-the-art tech to help you bring your vision to life.